On a night the Panthers were celebrating the 30th anniversary of the club’s 1991 NRL premiership victory over the Raiders, they stormed to a 30-10 win at a packed BlueBet Stadium.

Nathan Cleary, Jarome Luai, Viliame Kikau, Charlie Staines, Brian To’o and Mitch Kenny were among the swathe of Penrith destroyers as the Panthers played out an attacking masterclass, carving out their 22nd regular-season win in a row.

A dogged Raiders outfit played their role in the gripping affair. Canberra were without gun fullback Charnze Nicoll-Klokstad from the 24th minute due to a failed head injury assessment, but a solo Jack Wighton try early and a long-range Hudson Young line-break late, which resulted in an acrobatic Jarrod Croker try, inspired the Raiders. 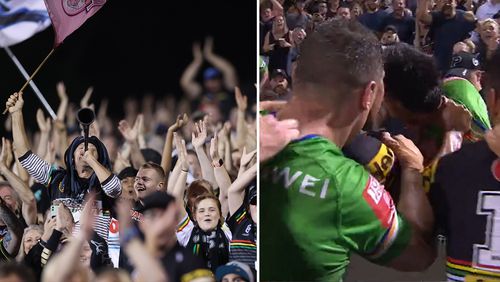 The enthralling story-lines continued to pile up when Penrith’s fans began to mock Canberra’s beloved ‘Viking Clap’ 64 minutes into the contest.

It was that which triggered the mockery of the ‘Viking Clap’, reigniting memories of former Sharks menace Michael Ennis taunting Raiders fans by performing the ‘Viking Clap’ after his side’s 2016 qualifying final victory at GIO Stadium.

“The crowd is going bananas!”

Rugby league great Peter Sterling was much more aware of the antics.

“I think just having a shot at their opponents.”