Dimitri Van den Bergh is the epitome of a Premier League player. The star quality, the flamboyance, big scoring, composure under pressure – the brilliant Belgian has all the attributes.

Having flourished as a contender during the 2019 edition, Van den Bergh’s World Matchplay success last summer secured him a permanent spot in this year’s showpiece, and he is currently setting the Premier League pace on debut.

The 26-year-old was thrown in at the darting deep-end against five-time winner Michael van Gerwen on Night One in Milton Keynes, where he was denied maximum points courtesy of a clinical 101 checkout by the Dutchman in the decider.

Van den Bergh recovered from a profligate start to overturn a 5-3 deficit against Nathan Aspinall on Night Two; reeling off the final four legs to prevail with a 103.7 average and seven 180’s, before inflicting a whitewash defeat on defending champ Glen Durrant 24 hours later.

He was forced to settle for a point against world No 3 Peter Wright on Thursday evening, despite firing in eight 180’s and averaging 101, although surprise defeats for Jonny Clayton and Michael van Gerwen saw the Belgian cement top spot.

He boasts the solitary unbeaten record in this year’s competition, and his performances throughout the week underline why he is rated so highly by players and pundits alike.

Wayne Mardle tipped Van den Bergh to challenge for the play-offs ahead of the tournament, but the Sky Sports expert admits the World Matchplay champ has surpassed his expectations.

“I was bigging up his chances before a dart was thrown and I’ve got to say even I’m surprised he’s looked as cool, calm and composed as he has,” Mardle told Sky Sports. 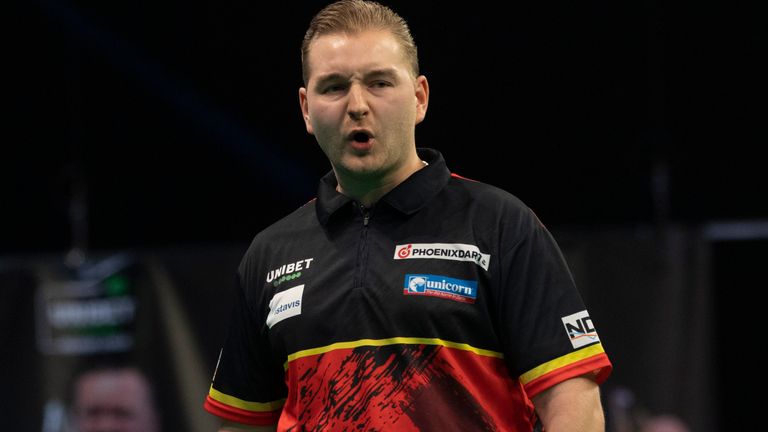 “It’s all new to him, but he’s not acting like it’s new to him. That tells me he is just ready.”

“You look at some players and there’s this composure thing going on with him that he’s always had. When he has that first dart in or above that 60, he doesn’t walk away with a ton. It’s a 140 or if it’s in, it’s a 180.

“He’s got this ability under pressure to perform, but he has got this level – his A-game is right up there – it’s astronomical. His B-game is basically 98, 99, bordering on a ton. That is going to be hard to beat day in, day out.”

The world No 9 has forged a reputation for coming alive on the big stages – evidenced by reaching two World Championship quarter-finals in three years, coupled with a World Series final on debut.

It is ironic given his comparative struggles on the Pro Tour – where he remains the only member of the world’s top 20 without a Players Championship title – but Mardle believes his composure has been the catalyst for his big stage exploits.

“When the going gets tough against someone that was playing really well – I go back to the Nathan Aspinall game – he just reeled off four legs like Nathan Aspinall wasn’t there,” Mardle continued.

“Rather than rushing in and getting all excited, like a normal 26-year-old would do; in a debut year of playing in the Premier League, it’s all new to him, but he’s not acting like it’s new to him. That tells me he is just ready.”

Van den Bergh is also receiving plenty of plaudits from his fellow professionals. Peter Wright was effusive in his praise of the two-time World Youth champion, who stayed at Chez Snakebite during the first lockdown.

Just months later, ‘The DreamMaker’ fulfilled his darting destiny by lifting his first major PDC title, and he insists his brief stay with Wright was instrumental in his Matchplay success.

Nevertheless, Wright’s respect for Dimitri is abundantly clear. So often renowned for making playful claims about his opponents, Snakebite could not have been more sincere in his praise.

“He’s always been an awesome player. He’s a gentleman. I’m privileged to play on the stage with this young gentleman. I’m going to be watching this guy on TV winning many majors in the future.

“He’s going to be quality. I’m glad I’m not playing in the next couple of years when he is starting to play proper darts,” quipped the colourful Scot.

That respect was reciprocated by Van den Bergh, who takes on his stablemate Jose De Sousa in an intriguing Night Five clash, fresh from ‘The Special One’ landing a nine-darter against Nathan Aspinall – the second perfect leg in as many days.

Complacency will not be a concern for Dancing Dimitri. He insisted that his World Matchplay triumph ‘would not change him’ and he has honoured that particular promise.

He has maintained the unassuming demeanour that transformed him from a prodigious talent into an established figure among the darting elite, and he’s relishing his first taste of Premier League competition.

“Coming off with a point against Peter, I managed to win a point against Michael. I’m still undefeated, I’m feeling confident, I feel that I’m a fighter and I’m very proud,” Van den Bergh told Sky Sports’ Michael Bridge.

“I’m here as part of the elite and I want to show them that I belong here, but I’m enjoying the experience and that’s the most important thing.”

Despite being in the fledgling stages of his career, he’s performing like a seasoned veteran in an unforgiving environment against the world’s best.

There are still plenty of darts to be thrown in this year’s Premier League, but Dimitri Van den Bergh has sent out an emphatic message at the Marshall Arena, and ominously, there’s still more to come from the dazzling DreamMaker.

Don’t miss an arrow thrown with Sky Sports as Premier League Darts continues on Friday at 7pm on Sky Sports Action – stick with us throughout the month for updates, interviews and reaction from start of this year’s competition