Complacency has never been an issue for Glen Durrant. You will struggle to find a more humble and level-headed character among the darting elite, but even he won’t have envisaged the alarming slump he’s endured over the last six months.

When Durrant proudly lifted the Premier League title aloft in October, he was vindicated. The scrutiny surrounding his switch from the BDO to the PDC was unprecedented, but his first major PDC title reaffirmed his status as one of the premier players in world darts.

Prior to crossing the darting divide, Durrant’s credentials were questioned in some quarters. Even when he scooped a Pro Tour title in just his second event as a Tour Card holder, critics insisted that he needed to deliver on the biggest stages to prove himself.

Despite reaching three major semi-finals in 2019, the lingering doubters were only silenced when he became just the third player in Premier League history to top the league phase – after Phil Taylor and Michael van Gerwen – he capped off a stunning campaign by clinching the title.

Nevertheless, Durrant’s delight soon turned to dismay when he contracted Covid-19 less than a fortnight later, and since then, he’s failed to advance beyond the last 16 in any of his last seven televised tournaments.

“Darts – a lot of it is in your head and ever since I won the Premier League, it’s just been a downward spiral and it’s been horrible. It has been a really difficult period,” Durrant told the Darts Show podcast last week as he prepared to begin the defence of his title.

“I knew something was not 100 per cent right prior to Covid. I wish I could blame Covid. I saw Wayne Jones last week who suffered with Covid and his form has dipped.

“I had just come off an 80 average against Jason Lowe and he just said: ‘Me and you have been battered by this Covid’. I wish that was the answer because it’s an easy answer.

“Even if we go back to Premier League Finals Night – 87 average in my semi-final against Gary Anderson, 92 to win it,” Durrant continued.

“You don’t win Premier Leagues like that. I won it because that’s the way I win matches; scrapping, fighting, that whole granite thing. I knew there was something slightly wrong that had come into my game just prior to then, so I don’t believe it’s Covid.”

The three-time BDO world champion is leaving no stone unturned in his bid to rediscover his form, revealing that he has compiled a list of possible solutions.

However, during Night One of the Premier League, Wayne Mardle noted that ‘playing with freedom is the key to playing your best darts’, and Durrant concedes that’s not a formula he’s been applying.

“I’m speaking to someone and he says I’m very, very defensive. I get quite upset when people come up to me in the street and say: ‘Come on Glen’, because I feel like I’m not even representing myself, I’m putting smiles on the faces of others,” he added. 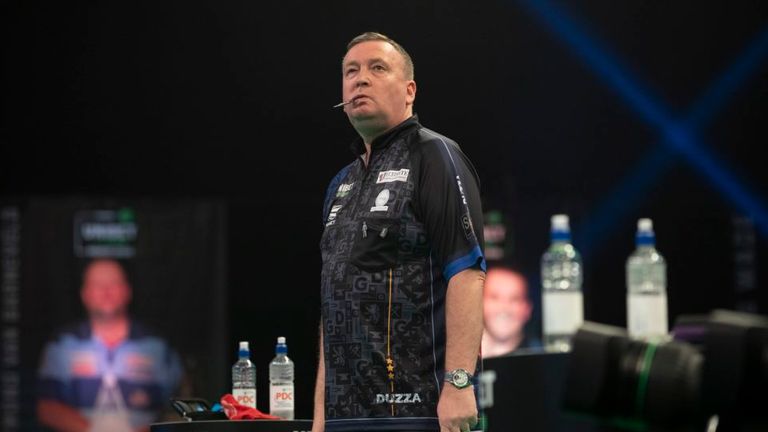 “People are telling me I’m going to come tenth. I do read things and they inspire me. ‘He’ll never make it in the PDC’ which I had for years and years. People are not expecting an awful lot from me, this is a wonderful opportunity to make it a great story.”

Durrant determined to defy the odds

Speaking ahead of the tournament, the Teessider recalled: “I watched the Premier League as a BDO player in a local pub and I went back to the pub, I went back to basics. They let me go in on a morning and he was fantastic.

“He said: ‘Glen I don’t care if you never win another game in life, we stood here six years ago watching Taylor vs MVG and said, ‘imagine if you played in front of that’.

“He said: ‘Not only have you played in front of it, you’ve won it, so he said: ‘Snap out of this Glen. Get back to enjoying darts, put a smile on your face and get back playing’. That’s what I am hoping the Premier League brings.”

That scenario is yet to materialise for ‘Duzza’, who is still searching for his first points of the season following consecutive 7-3 defeats against Nathan Aspinall and Jonny Clayton.

The reigning champion was punished for a sluggish start in a rematch of last year’s final against ‘The Asp’, while he trailed 5-0 against a rampant Clayton on Night Two, before improving as the contest progressed.

The condensed nature of the tournament in its current guise offers the opportunity for players to establish a platform and build momentum, although by contrast, when you’re lacking confidence, a stuttering start can be irreversible.

However, Durrant will bid to open his account when he takes on stablemate Dimitri Van den Bergh on Night Three, with the Belgian currently sat in fourth position with three points from a possible four.

The World Matchplay champion followed up an opening night draw with Michael van Gerwen by recovering from 5-3 down to triumph against Aspinall, boasting a tournament average of over 102.

If ‘The Dream Maker’ maintains that type of standard, he’ll be highly fancied to maintain his unbeaten start to the season, but Durrant can take solace from the adage: ‘Form is temporary, class is permanent’.

The 50-year-old’s success throughout his career has been built on tenacity, resilience and self-belief. He’ll require those attributes in abundance as he bids to return to winning ways.

Don’t miss an arrow thrown with Sky Sports as Premier League Darts continues on Wednesday at 7pm on Sky Sports Action – and stick with us through the week for updates, interviews and reaction from start of this year’s competition

January 18, 20226 min read
Team news, stats and predictions for the midweek round of the Scottish Premiership, Rangers' trip…

‘No respect’: Prost blasts Alpine as he confirms F1 exit

January 18, 20223 min read
Alain Prost accuses Alpine of "no respect" after his exit gets leaked and criticises CEO…

January 18, 20224 min read
The revelation that a leading sponsor of Novak Djokovic will "review" the drama of the…

January 18, 202211 min read
Will Matt Parkinson be England's principal spin bowler on their next away Ashes tour? It's…

‘No respect’: Prost blasts Alpine as he confirms F1 exit

January 18, 20223 min read
Alain Prost accuses Alpine of "no respect" after his exit gets leaked and criticises CEO…