Knights star Bradman Best aims to be back from his elbow injury within the next month.

Best told Nine’s Sunday Footy Show that he’d suffered a dislocation during training, on the Thursday before a Round Three loss to Wests Tigers.

“I got out of the brace on Friday, which is good news, and me and the physios are working hard to get it right,” Best said, ahead of Newcastle’s Round Four home match against the Dragons.

“The elbow – I just sort of subluxed it at training and I’m looking to be back in around three to four weeks.” 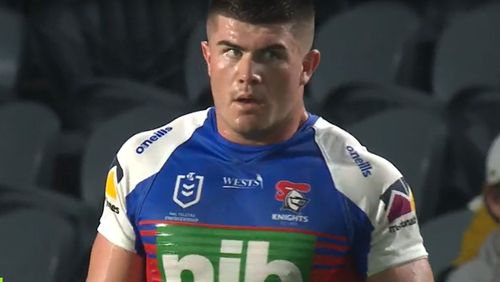 The powerful centre was in sensational form over the opening two rounds, generating NSW State of Origin buzz despite still being a teenager.

Yet Best has fought regular injury battles during his young career and admitted that his latest setback was frustrating.

“It sucks. Injuries are part of the game but to do that early in the [season], I was pretty gutted. But I got my head around it now and it is what it is,” he said.

“It’s always tough. I think I give myself the first day or two to be angry and sad about it but I know I can come back. I’ve been there plenty of times before and I think my mindset, I think I’m pretty resilient. Rehab’s tough but I’ve put all my eggs in one basket, so I know I’ll be right and I’ll get back out there.”