Nottinghamshire batsman Clarke struck three sixes and six fours from the No 3 spot for Kings, who eventually eased to their target of 122 with 37 balls remaining after rolling Quetta for 121 in 18.2 overs.

The 24-year-old – who scored three runs from his first 10 balls and then 43 from his next 12 – dominated a second-wicket stand of 55 with Babar Azam, the latter contributing only four runs from five balls in that partnership.

Clarke had earlier bagged four catches while keeping wicket for Karachi, including one to remove Tom Banton in the first over of the match after Gladiators were inserted by Kings captain Imad Wasim. 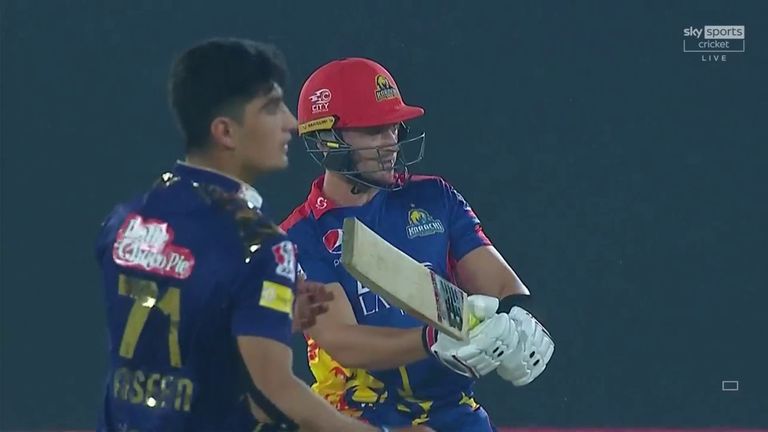 It’s nice to contribute. I am loving being in Pakistan and it’s amazing to play in front of a few people in the crowd. It’s been a while since I have had the gloves on so it was nice to be involved behind the stumps. I love being in the game and taking catches is always nice.

Chris Gayle had top-scored for Quetta from the No 3 position, managing four fours and two sixes in his 39 from 24 balls, but Gladiators’ next highest-scoring batsman was Azam Khan with 17.

Kings seamer Arshad Iqbal was the pick of the bowlers, bagging excellent figures of 3-16 from his four overs and sending down 16 dot balls out of 24.

Dan Christian chipped in with the wicket of Gayle, as well as a catch and a run out as Quetta were dismissed 10 balls shy of their 20 overs.

Clarke then took Naseem and Qais apart before holing out in the sixth over, while Babar made 24 prior to his dismissal as he overtook Kamran Akmal as the leading run-scorer in the history of the PSL.

Babar took his tally to 1,540 across the six years of the competition, moving past Akmal’s count of 1,537.

Mohammad Nabi (30no off 14) then hit three sixes of Ben Cutting in the 14th over of the chase, including the match-winning strike over deep square leg.

Kings beat Lahore Qalandars in last season’s final to win their maiden PSL crown – the knockout stages having been delayed until November due to the coronavirus pandemic.

Quetta defeated Peshawar Zalmi in the 2019 final to claim their maiden title, having lost in the 2016 and 2017 finals, to Islamabad United and Zalmi respectively.

Watch every game of the 2021 Pakistan Super League season live on Sky Sports.

August 13, 20224 min read
By Sam Worthington with APAll Blacks coach Ian Foster admits he has "no idea" whether…

August 13, 20221 min read
Well, we've got some fireworks in San Juan as James O'Connor's try is overturned by…

August 13, 20224 min read
By Sam Worthington with APAll Blacks coach Ian Foster admits he has "no idea" whether…

All Blacks end losing streak with emphatic victory over Springboks

August 13, 20222 min read
The All Blacks have won an incredible Test match as lock Scott Barrett barges over…

August 13, 20223 min read
Australia all-rounder Ellyse Perry named Player of the Match for her 58 off 31 balls…

Rampant Man City too hot for Bournemouth to handle

August 13, 20225 min read
Manchester City sent out an ominous warning to the rest of the Premier League after…